“Jim Stewart has a way with words, a unique way of describing feelings. A unique way of showing the reader the dynamics between two living beings.”

“Gripping action. A dash of the unexpected. Well-drawn characters. Ochoco Reach is THE debut novel to command the top of any reading list!”

~Andra Watkins, NYT best-selling author of Not Without My Father: One Woman’s 444-Mile Walk of the Natchez Trace.

“In Ochoco Reach , Jim Stewart takes readers on a white-knuckle journey through some pretty rough country. But the real drama plays out against the infinite landscape of the human heart.”

~Craig Ryan – author of The Pre-Astronauts, Magnificent Failure, Come Up and Get Me (with Joe Kittinger), and Sonic Wind. 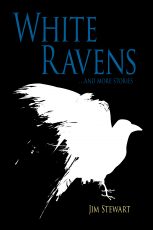 “The stories in White Ravens are about lost-and-found love on the American Frontier, the territory Huck Finn set out for. It’s a book about place. Stewart’s raw characters are domestically unmoored, big-hearted, edging toward crazy, and immensely appealing.”

~Robin Cody – award-winning author of Ricochet River and Voyage of a Summer Sun.

First chapter of Joshua’s Tree, my next novel

The streetlights lit the rays of water that inexorably dove into the ground as gravity wrote the script. Bucket and I moved through it like fish through a current. We were closer to dolphins than we were to other mammals. It was a river we ran through, an incessant downpour that only Northwestern people living on the west side of the Cascades can understand. We see it all too often from November to June. It is who we are. I’d grown up on the east side of the mountains, but had embraced the weather like, well, the proverbial duck. If you want to visit, come in the summer. Don’t bother with the winter. We hate whiners.

I looked into his inscrutable face, feeling the span of our lives. I sensed the slow beating of his heart and the beating of all hearts in a sphere bound only by my imagination. I felt the measured breathing of everything in the world. I felt myself touching Willy’s living skin.

A Lakota Woman Speaks to a Corpse from the Seventh Cavalry, During the Evening of June 25th, 1876

First published in The Alembic, 1997

The Actress and the Grunion

A Frog for Cheryl